DONG Energy has decided to make Siemens the preferred turbine supplier for the Hornsea Project One wind farm. 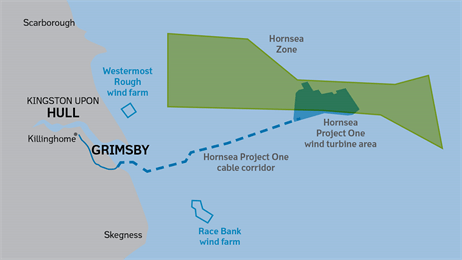 The Hornsea Project One wind farm is located 120 kilometres off the Yorkshire coast and covers an area of 407 square kilometres. It is currently under development and when built, it will be the largest offshore wind farm in the world, almost double the capacity of the current record holder, London Array. The offshore wind farm will be able to meet the electricity needs of approximately 800,000 British households.

As preferred supplier, Siemens will supply up to 171 of the 7.0 megawatt (MW) wind turbines for the 1.2 gigawatt (GW) Hornsea Project One wind farm. The delivery of the turbines is subject to contract signing and DONG Energy making a final investment decision, which is expected in the second half of 2016.

"Our decision to make Siemens the preferred supplier for our Hornsea Project One wind farm is a crucial step in our efforts to lower cost of electricity. The 7MW turbine is an upgrade of the 6MW platform which we know very well from Westermost Rough in the UK and Gode Wind 1+2 in Germany. Larger and more cost efficient wind turbines are key to reach our strategic target of reducing cost of electricity from offshore wind to 100 €/MWh in 2020."

"The decision by Siemens to open new production facilities in Hull on the British east coast is a key factor in bringing down the cost of wind turbines for this project. This preferred supplier agreement will both help reduce the cost of offshore wind and create and retain real jobs in the UK."

Besides being the preferred turbine for Hornsea Project One, Siemens turbines will also be used at Race Bank and Walney Extension Phase 2, which was announced earlier in 2015.

"We are very pleased that DONG Energy has once again chosen Siemens as preferred supplier for its major UK projects Walney Extension Phase 2 and Hornsea Project One offshore wind power plants. Our advanced model of our proven Direct Drive wind turbine with a capacity of 7MW will leverage the energy output of these two offshore wind projects and contribute to lowering the cost of electricity. Our new factory in Hull will support these projects and further promote the growth of the UK offshore industry."

For Race Bank, DONG Energy has signed a contract with Siemens for the delivery of 91 of the 6MW turbines with performance enhancing features resulting in a total capacity of up to 580MW. At Walney Extension Phase 2 (up to 330MW) a contract has now been signed with Siemens for the 7MW turbine. The contract for Walney is subject to DONG Energy making a final investment decision.