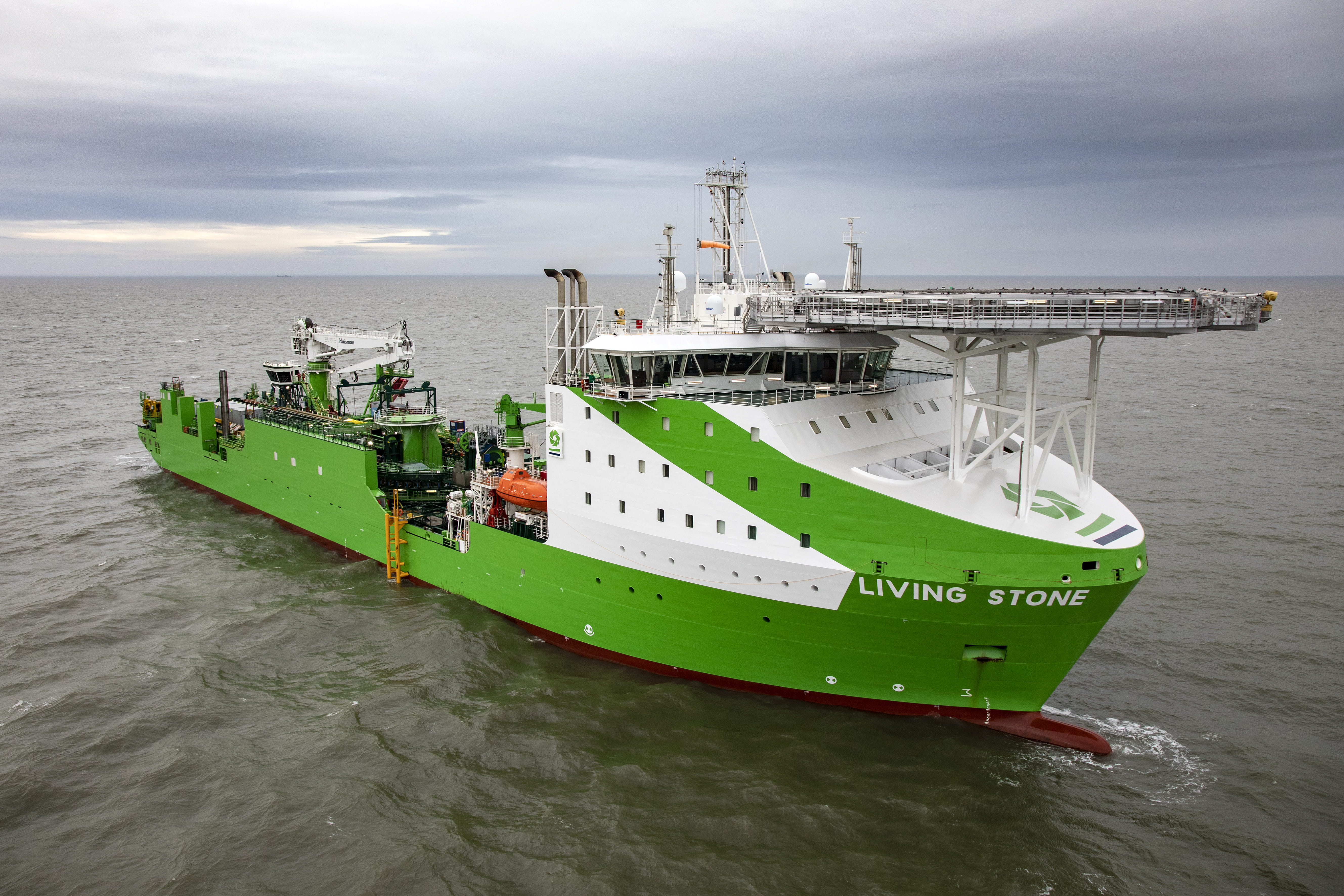 Tideway's new cable and installation vessel 'Living Stone' - one of over 35 vessels involved in the installation.

Construction is progressing well on what will become the world’s largest offshore wind farm, as Ørsted announces the completion of export cable installation at Hornsea One months ahead of schedule.

With offshore export cables totalling 467km, around the same distance as London to Newcastle, plus an onshore cable route of 38km connecting each of the three strings to the national grid, it is the longest AC offshore wind export cable system ever to have been installed.

When fully operational in 2020, Hornsea One’s 174 turbines will generate enough clean electricity for well over one million homes. The electricity generated by the turbines 120km out at sea will pass through one of three offshore substations, before being carried by three high voltage subsea export cables (245kV), via the reactive compensation station, to shore.

Duncan Clark, Programme Director for Hornsea Projects One and Two, said: “This record-breaking project is a step up in scale from the offshore wind farms we have today. It will be the first offshore wind farm in the world with a capacity over 1GW, and at 120km out to sea, we are pioneering new technology and really at the forefront of scaling up clean energy infrastructure with each phase we complete.

“I’d personally like to thank our team including all of the contractors who have enabled us to reach this milestone ahead of schedule. Over 35 vessels were involved in delivering the installation, which was conducted safely and efficiently by all. An incredible feat of logistical coordination, and truly a landmark achievement for both the project and the growing offshore wind industry across the globe.”

Termination and testing is also being completed ahead of schedule, and is expected to conclude within the first months of the New Year.

In November, Ørsted announced that over 100 of the 174 foundations have now been installed, and turbine installation is expected to commence in Q1 2019.

The Connector has two large turntables with capacity to hold up to 6,000 and 3,000 tonne cables, and has laid subsea cables since 2012 in a range of different water depths. For this job, the Connector lay-system was been replaced with a bespoke back deck cable lay spread designed and installed by Tideway for the Hornsea export cable project.

The Living Stone, operational since 2018, is equipped with an innovative dual-lane cable installation system, consisting out of two cable highways - one for laying the cable and one where the next cable can be simultaneously prepared and have the cable protection system (CPS) installed. This significantly reduces the time needed for preparing the cables, minimises the manual handling and risk of damaging the cable, increases the vessel’s workability and ultimately, improves production rates.